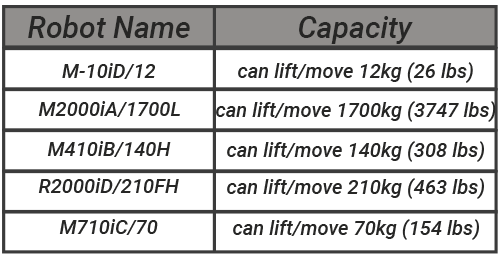 Calculation of these parameters allows the robot integrator’s design engineer to determine what robot is needed for an application.  Inertia values can also be used by the designer to adjust end of arm tool configuration and load orientation in order to optimize robot model selection and ensure the robot’s load will fall within the manufacturer’s design specifications.
Identifying the payload lifting capacity of a FANUC robot is rather simple. It’s part of the model number. You can see in the chart on the right, the model number directly correlates to the payload in kilograms.

The Moment of Inertia 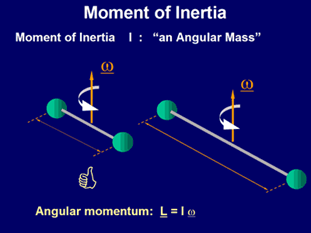 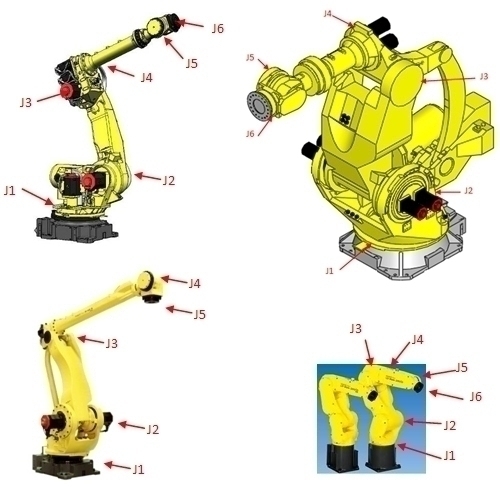 All payloads have the properties of weight and moments of inertia. Merriam-webster.com defines moment of inertia as:

The moment of inertia depends on three things:

It is not dependent on gravity, so inertia calculations for a robot arm operating in outer space are just as important as they are here on earth! Depending on the robot model, a robot’s joints and servos are typically bigger/stronger near the base and smaller/weaker toward the faceplate where an EOAT (End of Arm Tool) is connected.

To determine if a robot will be able to perform a task, the capacity of each joint must be considered.
FANUC provides us with a software tool to check if the payload we have designed falls within the capacity of each robot and all the joints, but it is our responsibility to design the tool and to calculate the moment of inertia for all possible conditions. Motion Controls Robotics, Inc. has CAD software tools to accurately determine the moment of inertia for everything we design.

For further information about moments of inertia calculations, CLICK HERE for formulas for a variety of shapes. 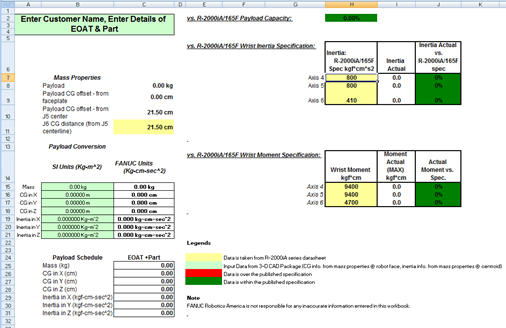 Designing an End of Arm Tool that will optimize the life of a robot is of the utmost importance to our customers. Selection of the proper robot to optimize cost while ensuring that the selected robot will perform properly over its expected life is even more important to our customers. Motion Controls Robotics, Inc. is a Level 4 Certified Servicing Integrator of FANUC robots. We have all the tools and experience to select the right robot and to design a robust End of Arm Tool that will last in your robot application for years.