Eight years ago Motion Controls Robotics began a journey to help a division of an international paperboard converter discover a way to remove an inefficient, out-of-date and unreliable gantry style central unitizing system and replace it with a more efficient, innovative robotic unitizing cell. 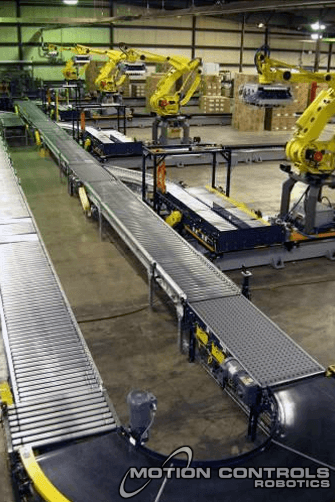 At the time, the converting company knew their current process was just not expandable and would not allow the company to grow as new SKUs were added to their production and as throughput demands increased.

The centralized robotic unitizing system MCRI designed to replace the gantry system sorted and unitized cases with a wide range of dimensions and weights. AGVs were added to transport the unit loads from the robotic unitizers and moved them to stretch wrappers. Once the unitized load had been dropped at stretch wrappers, they were wrapped and manually labeled. One key goal of the AGV system was to stretch wrap unit loads before they were ever transported on a conveyor. This keeps the unit loads as tight and uniform as possible before loading them onto over the road trailers.

The chart below shows an overview of the benefits the company experienced from the robotic unitizing system installed by Motion Controls Robotics. 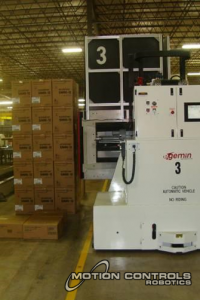 After about 7 years, the paperboard converting company’s growing division needed even more production space at their plant site. A plant addition was planned, and MCRI was called in to relocated the existing system with 5 robotic unitizing lines and add 2 new identical unitizing lines along with additional AGVs and stretchwrappers.

According to the company’s project manager,

“MCRI was the perfect fit for our major expansion. They provide first class service with the highest integrity. Their staff is very personable and was very successful in leading the engineering, procurement, and implementation phases of our material handling system needs.” 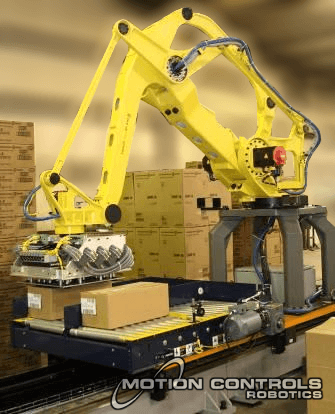 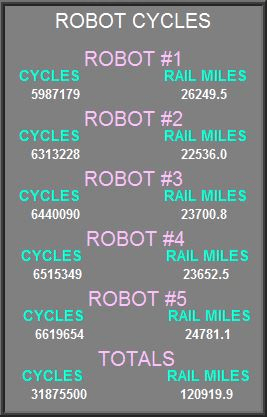 During the transition from the initial unitizing layout to the expanded system, MCRI’s lead PLC programmer checked the robotic unitizers’ final robot statistics from the original system.

As shown in the adjacent screen shot taken from a system HMI, in the first seven years of operation the robots had traveled up and down the rails between case pick location to unitizing positions located along the rails a total distance of about 121,000 miles.

Roughly translated, each of these robots traveled the equivalent distance of a trip around the world in their seven years in service – averaging about ten miles a day.

The FANUC robots demonstrated trouble-free operation during this period, attesting to their world class reliability and performance.

After the original system had been installed and running for several years, our customer’s Assistant Plant Manager told us,

“Overall, the biggest benefit from our new system is reliability, which was our primary consideration when we were looking for a new system. We are also excited to be using new technologies that have exceeded our original expectations in every respect.”

MCRI expects the relocated, expanded unitizing system to perform as well or better in years to come.

Motion Controls Robotics has delivered numerous centralized palletizing and unitizing systems for our customers. Like central palletizing solutions, central unitizers receive case loads of product from multiple locations around the plant via conveyor, Automatic Guided Vehicle, or other material handling system, and then stack the cases into unit loads.

Unlike a centralized palletizing system, a centralized unitizing system has no pallet underneath each unit load. Benefits to elimination of the pallet include; better use of cube space for finished load shipping in over-the-road trucks; lower packaging costs, plant floor space savings, and lower automation cost since empty pallet handling is no longer required.
Contact MCRI to get more information about using robotics for unitizing loads for shipping to customers.