skip to Main Content
Menu
Unraveling Degrees of Freedom and Robot Axis: What does it mean to have a multiple axis pick and place or multiple axis robot?

What does it mean to have a two or three axis pick and place unit or a two, four, five or six axis robot, or even a seven axis robot, and how does that refer to degrees of freedom of a robot?

A relatively technical article in Wikopedia describes degrees of freedom in general terms. The following article relates specifically to industrial robots as they are used by industrial 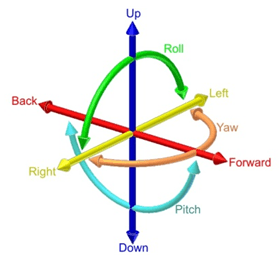 While it is not absolutely the case, most pick and place devices and robots have the following capabilities; 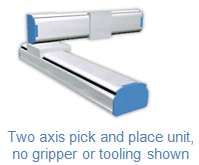 You will find one and two axis pick and place units in simple applications moving parts from one location to another in a single line or plane. These units aren’t always recognized as robots, but when servo controlled can be put to use as simple and highly reliable material handling devices. “Robo Cylinders” or servo controlled cylinders are becoming increasingly popular as replacements to air operated cylinders. 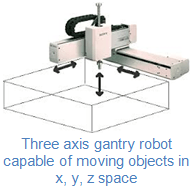 Three and four axis gantry robots – One example of a three axis pick and place unit that could be referred to as a robot would be an automated overhead gantry crane.  If there is no ability to rotate its load, this could be called a three axis robot. With the addition of another axis of movement at the end of arm tool to rotate the product around a vertical axis, this would qualify as a four axis robot. These have been frequently used in simple material handling applications where part orientation does not need to change. Addition of servo controls to these devices puts them solidly in the robot category. 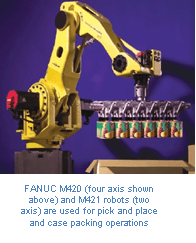 location in space. Robots that can move an object anywhere in x,y,z space usually have the need and the ability to rotate the part along at least one axis (commonly along the vertical axis), making them four axis robots. For example, a case packing robot that can move in x,y,z space will need to orient the case along the z axis, or vertical axis, to keep the case square between pick and drop location (or to reorient the case to suit the direction of pick and drop conveyors).

The FANUC M421 is a special two axis articulated robot – it is a variation of the FANUC M420 which has four axis, or two more independently controlled joints and servo motors. The M421 has no J1 motor/reducer and therefore no axis of rotation at its base.  It has no J4 motor/reducer, and therefore no ability to rotate the object at the robot face plate where the robot connects to the end of arm tool. This reduces the cost of the robot. It can pick up an object in one place and move it to another on a straight line. This robot can economically move objects between processes and perform simple case loading operations.

Four axis robots are commonly found in palletizing operations. The FANUC M410 family of palletizing robots can pick up single cases, rows of cases, or entire layers of cased product from incoming case conveyor and build case patterns in any required pallet pattern. 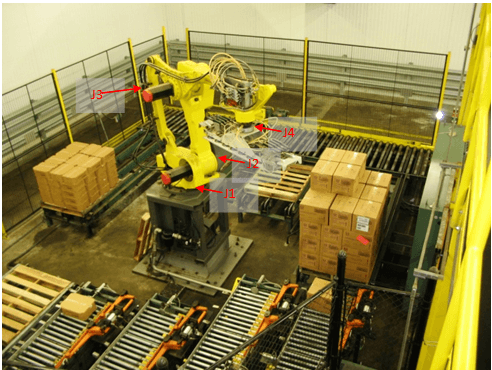 Five axis robots – the FANUC M410/140 is a special form of the M410/160 robot in that the upper linked arm is eliminated, and a limited amount of J5 axis movement is introduced. This allows the faceplate, where the end of arm tool is mounted, to be tilted slightly as the robot reaches its move limits to keep the faceplate level or parallel with the floor. Even though the robot has a fifth axis, the robot is designed to always have its faceplate parallel to the floor. Elimination of the upper linked arm assembly on the M410/140 reduces its mass and allows it to operate faster than the M410/160.

Six axis robots – are the workhorses of today’s robot products, comprising the majority of robots sold. They offer the greatest flexibility of common robots, but are also more expensive than their counterpart robots having fewer axis.

Capacities range from a few kilograms to 1200+ kilograms. FANUC’s smallest 6 axis robot, the new LR Mate 200iD/4S with 4kg capacity, the R2000 which is an intermediate capacity robot with up to 185kg capacity and FANUC’s most popular in terms of total units sold, and the FANUC M2000, the king of all electric servo driven robots, are shown below; 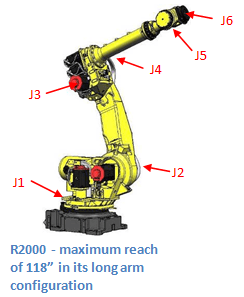 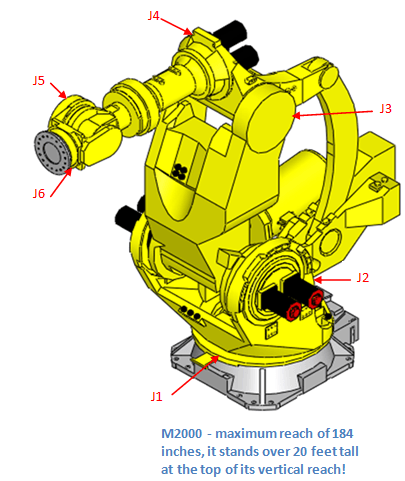 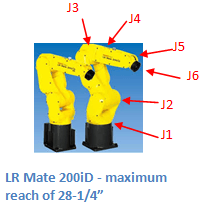 With their six axis, these robots can place an object or end of arm tool at any location in space (x, y, z) within their work envelope, and can orient the tool or object in any orientation (roll, pitch, yaw).
Robots with seven or more axis of motion – Placing any of the above six axis robots on a rail introduces a seventh axis, or degree of freedom.  Likewise, a four axis palletizing robot can have a fifth axis of motion added by mounting the robot on a rail. Rail mounted robots are commonly used to load and unload multiple CNC machines with a single robot. MCRI has also used this arrangement to allow a single robot to palletize multiple SKUs, up to 16 at a time in one system.
Auxiliary axis controls – Additional axis of control in a robot cell can be used for servo control of part feeding systems, turntables, end of arm details, and other movable load surfaces inside (or outside) the robot cell that need to be coordinated with the robot.

FANUC provides Auxiliary Axis motor controllers that are tightly integrated with the robot for servo control of additional axis of motion related to robot movement. Highly integrated, high speed auxiliary axis control allows the robot controller to simultaneously coordinate motion of seven or more axis of the robot, rail, end of arm tooling, part feeding devices, and other equipment that needs to have coordinated motion with the robot. 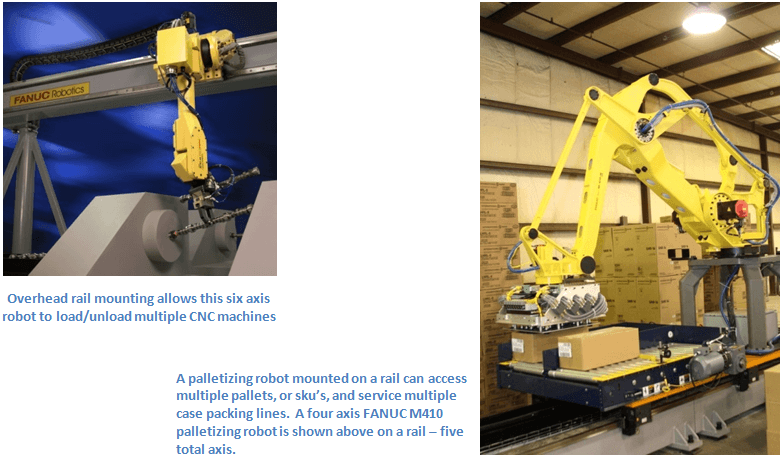 The “Snake” robot – the idea of having an extendable axis along any of the main six axis of a robot would create  what has been referred to as a “snake robot” by mainstream robot manufacturers. A more exotic version of a snake robot has been developed in multiple locations of academia. See this link for a fun (but potentially very strategic or even lethal) version of a snake robot developed at Carnegie Melon University.