When there is a moving robot, equipment or machinery in a system, it is important to identify, define, and protect against all hazards. In the past, this was predominantly done with physical barriers, such as fencing and gates, that restrict access to an area with the potential hazard. These barriers may solve the safety issue but bring new issues that cost manufacturers downtime and efficiency.

Fences must contain the entire robot system. The fenced-in area has an entry gate process that requires an access request from the operator, the robot stops at a good stopping point, the operator enters the fenced area, works, leaves, resets the system, and the robot starts moving again.

Likewise, area scanners allow for protection zones to be defined, but without fencing. The operator requests access to the area, enters, finishes work, and then resets once they leave the area. One can work safely, and the scanner slows or stops the operation at a known stopping point only when someone or something is in a defined zone. Robot and system movement only resume once the someone or something has left the area.

If the operator does not request access and enters the area the system will fault and come to a stop. This takes more time because the robot isn’t able to stop at the known stopping point, and has to cycle back to the correct position.

Area scanners keep both people and equipment safe. Protection and warning zones can be configured with flexibility and adapted to structural conditions.

Area scanners use time-of-flight technology to calculate the protection zones. The scanner calculates the time it takes for a laser to bounce off an object and return to the sensor.

Scanners can be mounted vertically or horizontally and the graphic to the right shows a general coverage of an area scanner. An area scanner monitors a 2D area of a 190-degree angle with several meter radius. 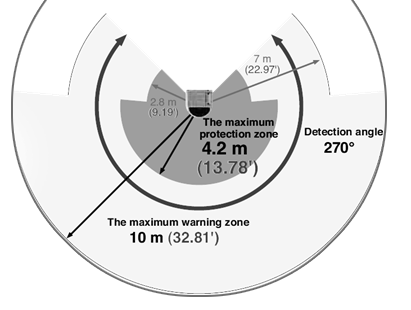 Certain Area scanners can be set up for multiple protection and warning zones. These can be used when there are multiple moving hazards and it is safe to enter one area but not another.

Another common safety feature in robot systems is light curtains. Light curtains work by sending optical beams from an emitter across a work area to a receiver unit. When the beam is broken, hazardous motion comes to a stop. This means light curtains are the best option for very fast response time. These beams can sense even small intrusions into the space – such as fingers. Another positive feature about light curtains is they can be programmed to distinguish between humans and product. This operation is called light curtain muting. 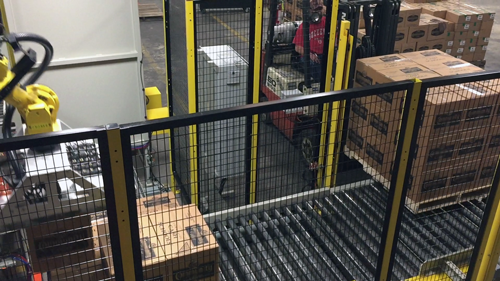 An equipment protection example would be if there are several moving items in a cell, such as a robot and a rail that transfers parts.

Area scanners can be used in

Area scanners can be used to monitor the hazardous area directly around the robot and either slow or stop the robot when the operator enters the cell or is in a hazardous area. This is very helpful in keeping production running at a consistent and efficient pace. 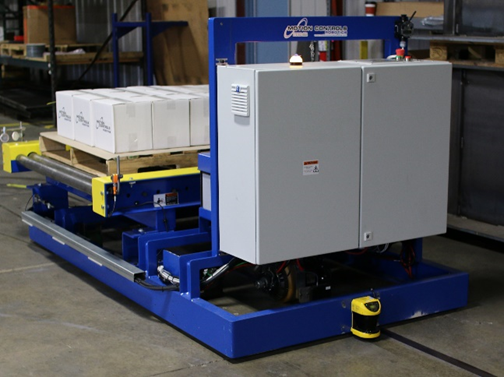 A safety laser scanner can be mounted on Automatic Guided Vehicles (AGVs) like a transfer cart to eliminate the risk of collisions with objects or people in its path and help to eliminate unnecessary stoppage.
The area scanner mounted on an AGV can use multiple warning and protection zones for effective and safe operation. Examples of these zones can be a slowdown zone and safe stopping zone.

Other moving machinery in a system

Any moving equipment that could be a hazard to workers and would benefit from the programming of zones to reduce speed or completely stop a process.

Area scanners added to robot cells in conjunction with a safety gate to ensure no one is in the cell if the safety gate is closed. While there is someone or something in the protected zone, the hazardous movement will not restart.

The example area scanner shown in this Tech Talk article is manufactured by Keyence. Contact them if you would like to add an area scanner to your current system.

If looking to integrate a robot into your process, know that there are options available to make the process more flexible.
Read more about Robot Safety Contact Motion Controls Robotics to Inquire about System Integration 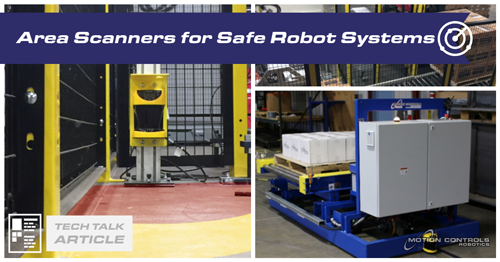