Basic Line Tracking is used in robotic pick and place applications where products are being picked off of a moving conveyor, placed on a moving conveyor, or both. Line Tracking uses an encoder mounted directly to the drive shaft of the conveyor or to an encoder wheel placed directly onto the conveyor’s traveling surface. When using basic Line Tracking, a sensor is triggered and the robot starts tracking for the picking or placing process. In this application, the products have to be presented in the same order to the robot because there is no vision to correct for randomness in pick location. 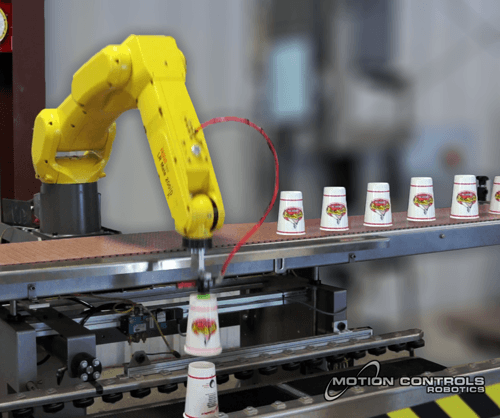 Machine vision is used in a growing number of robot cells – sometimes for a variety of reasons. Vision can help to locate, track, and inspect products.  2D or 3D vision can be used in the robot application. Motion Controls Robotics uses FANUC’s iRVision and Cognex camera solutions to solve customers’ challenges with vision.

Visual Line Tracking is used to maintain a constant picking flow of randomly placed product from a moving infeed conveyor. In a robot cell if the robot never has to stop moving, it is working at its most productive capacity.

One example of a vision application used to solve more complicated robotic pick and place problems is Visual Line Tracking. The first step to Visual Line Tracking is setting up the basic Line Tracking described above. Then the machine vision camera is calibrated to the Line Tracking setup so they work together. The camera snaps the image, finds its orientation across the conveyor, and records the encoder information. So when the product moves into the robot’s work area it can be tracked along with the vision offset.

How does Visual Line Tracking work?

FANUC’s iRPickPRO is the setup software used to input product data, design, and simulate the robotic pick and place process. Both Line Tracking and Visual Line Tracking have the same core software option. The software includes options to optimize the picking process through different types and speeds of conveyors and single or multiple picks. FANUC’s iRPickTool Software is needed when setting up multiple robot line tracking applications. This software helps to simulate and setup for best load balancing using multiple robots.