Bins are often used in the manufacturing environment to hold parts included in an assembly process. The parts are usually randomly placed or dumped into the bins and then moved in-line for the assembly process. 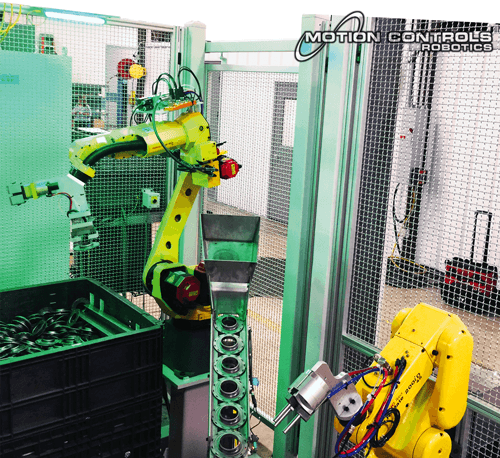 Automating the selection of a part from a bulk loaded bin is a challenge robotics has been eager to solve. The issue lies in the fact that the parts are disarranged or randomly located, meaning conventional methods for robots to locate parts to be picked would be difficult if not impossible.

Today, robotic automation technology from FANUC allows skilled integrators like Motion Controls Robotics to scan, map the parts and pick parts that are within specification. With new innovations in robotics technology, random robotic bin picking has become an achievable application for a broad range of parts.

FANUC has a variety of robots that are available for use in bin picking applications. These robots are combined with intelligent software and hardware to accomplish the end goal. 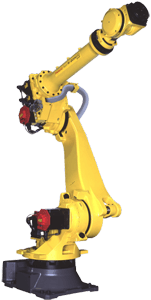 Vision capabilities available through FANUC are improving continuously. The 3D Area Scanner (3DAS) is the latest in a long history of innovations, and is essential to improving bin picking accuracy and speed.
The 3DAS retrieves information about the placement of parts in the bin, develops a 3D point cloud/map and transmits the information to the end of arm tool so it can pick the parts in the optimal picking position. 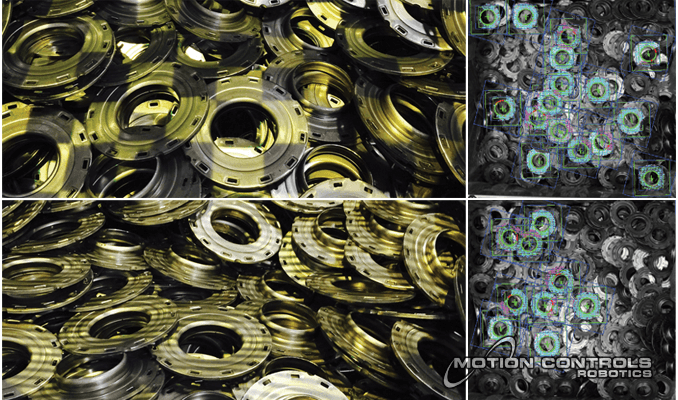 The 3D map is developed through three scans: the overall area scan, a checkerboard scan and a linear scan. The coordinates of each of the scans are used to place the parts and retrieve the 3D map of the bin for part selection. Once the top layer of parts are selected the process repeats for the newly exposed parts in the bin.
The 3DAS is available in two models for small or larger bin sizes and can be setup using the iPendant or on a PC.

Flexible, multiple use end of arm tooling development is another key in designing a robotic random bin picking cell. Bins hold parts that are bulk packed with no order, so the gripper has to be able to grab parts in various positions. Secondly, the gripper has to be able to reposition parts to improve pick ability. The video above shows a dual mechanical and magnetic gripper. The mechanical gripper selects the parts and places them on a tray. The magnetic gripper repositions parts within the bin to improve the frequency of picks. Common types of grippers used in bin picking are magnetic, vacuum cup, and two or three jaw mechanical grippers.

If you are interested in learning more about how robotic bin picking can transform your process, use our robotic request form to get more information.