In continuing our discussion of fenceless robots, FANUC has introduced their first collaborative robot. While Dual Check Safety can help to remove fences around a robot by slowing the robot when a worker approaches to add product or stopping the robot for maintenance, DCS cannot allow you to completely interact with a normal robot. The ultimate collaborative robot is one you can work with side-by-side.

FANUC started with an already popular robot, the M20iA, and based their collaborative robot on this model. First they had to address the hard metal. This was done by adding a rubber material over the entire body of the robot.

Next, they had to deal with color. They went with FANUC green (what?). The green represents safety and sets the robot apart from the other yellow FANUC robots in a facility. This alleviates mistaking a collaborative robot for a work alone model.

Lastly, they had to make sure that there are no areas on this robot that could pinch the operator.

The CR35iA has several safety features automatically programmed into the robot. When an operator is in the cell, the robot moves slowly and if the robot bumps into the person it stops without causing any harm. The robot uses force sensing to decide when it should stop moving. Depending on the duration and size of the stopping force, the robot can restart on its own, or a worker can restart the robot by simply hitting the resume button on the front or rear of the robot.

Now this stopped robot could be a problem if the person is against a wall or other structure and can’t move. So the robot can also be “glided”/moved away with a push from the person. When the robot resumes movement, it resets itself to the programmed path then continues working.

Even with the rubber suit, there is ease in adding sensors and\or vision. Adding a 3D Area Sensor to the CR35iA collaborative robot would allow it to be programmed to pick items from a bin and hand them to or place them on a structure for the operator.

The payload of the CR35iA is 35kg or 77lbs which far exceeds the load capability of all other collaborative robots.

The CR35iA moves at 250mm/s when it is working in a cell as a completely collaborative robot, but has the potential to reach 750mm/s when alone in the cell. The reach of the robot is 1,813 mm; large enough that it can be used for certain palletizing applications.

The FANUC CR35iA collaborative robot is great for automotive, packaging, distribution and metalworking applications. The CR35iA increases safety, employee health, and productivity in applications where heavy items need to be moved and then some work needs done before the product is moved down the line, all in an area where operators can move about freely.

Watching the robot move with the operator gives the robot friendly characteristics.  It is odd that establishing a safe closeness with the robot can change your feeling from FANUC yellow to FANUC green. You will also notice this in the presentation of the robot (where first person is used) like in the caption to the right. This robot really does become the operator’s companion.

Use our robotic request information form if you would like to learn more about this exciting new robot. 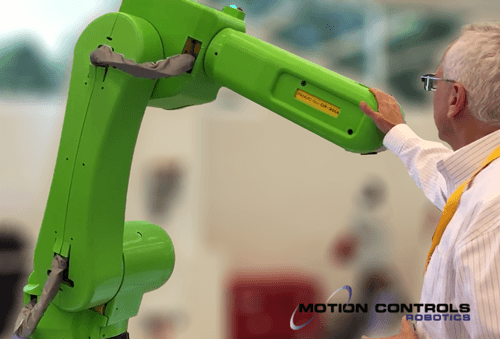